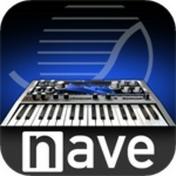 Update Required To play the media you will need to either update your browser to a recent version or update your Flash plugin.

Over 120 high quality presets, crafted with love for Waldorf Nave.

Cinematic pads, strings & soundscapes. Lush arps and plucks. Experimental yet very musical sounds. How about howling, distorted guitars for any cinematic duties or atmospheric and ambient sounds only a wavetable synth like Nave is capable of. Every sound was made to inspire (aka not the same 'ol same ol'), every modulation source available via touch screen was used to let you play things with expressiveness, from adding movements to pads, to morphing the sounds. New wavetables were carefully sliced, cooked and served as well.

This bank covers a lot of sonic territories. The best thing to do is simply to check out the soundcloud demos, they're unprocessed recordings straight from Nave, to get an idea of what you might find inside this bank.

While this bank will work on both the desktop version and the iOS version, it uses the touch screen extensively for various modulations, they do obviously work in the desktop version as well. Being able to control after touch, expression, the XY pad, etc. will add another dimension (or two) to these sounds.

Sound examples below as well as a bank with 30 presets from Blades.

While you can use and abuse these sounds in your productions, commercially or non-commercially, however you want, please keep in mind that this license is only valid for you, the original buyer. You're not allowed to redistribute the bank and it's preset.

Want to try before you buy?