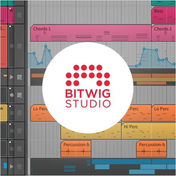 Update Required To play the media you will need to either update your browser to a recent version or update your Flash plugin.

So, since we are missing a formant filter in BW, I built one.

The morphing can't be done freely between vowels, it's always between two predetermined ones, since that's the way Vector 8 works. Some kind of better modulation device would be great here.

First I tried a peaking EQ in series as well as parallel bandpass filters, but realized that the morphing would be horror to realize, since I needed looots of BP filters in serial since they are not too steep in BW. This also gave a nice sound that has features of the original left. sharp BP filters let through ONLY the formant frequencies, so melodic sounds sounded instead just like a vowel at a predetermined pitch....

Morphing was a pain in the ass to do, I had Voxengo Span running, and white noise fed into the effect. The frequencies of all peaks are set to 0, and the actual frequency is determined by the Vector 8 modulators. Since when defining modulation amounts, instead of frequency values we get proportional values like +1.5 etc, I had to just tweak the modulation amount for each knob until I could see what I wanted in the spectrum analyser... I would much prefer that along with the proportional modulation amount also the frequency/volume range of knobs would be shown.